Kinetec have been supplying continuous passive motion devices and orthopaedic traction frames to the rehabilitation market worldwide since the 1970s. Kinetec is world renown for quality, innovation and service.

Kinetec has existed for over 40 years in Charleville-Mezieres, France, initially set up by a physiotherapist M.Jean-Claude Pecheux who wanted to sell orthopaedic traction frames, trading under the name Cogemo.

Following the ground breaking research into continuous passive motion (CPM) therapy by Dr. Robert Salter in Canada in the mid-1970’s, Monsieur Pecheux invented the first CPM device for the knee in 1978 and initially sold it just in France. In the following years, his products began to sell well internationally following his attendance at numerous international exhibitions and congresses.

Kinetec has SET beliefs – service, environment and technology. These beliefs will drive the company forward during the coming years.Bob Donaldson, CEO

In 1986, the American company Richards acquired Kinetec and several months later it became Smith & Nephew Kinetec when Richards was acquired. This led to significanct expansion of the business due to the Smith & Nephew country network, resulting in sales of CPMs into over 60 countries.

Throughout further acquisitions of the holding companies, by Ability One in 2002 and then Patterson Medical in 2003, Kinetec continued to grow, designing and delivering high-quality rehabiliation devices including CPMs, traction frames and active passive devices.

In 2013, Kinetec was acquired by the MedFac group. This led to the establishment of a new company office in USA in 2014 and then Kinetec Medical Products UK Ltd in the UK in January 2016.

During the last few years, Kinetec has expanded its product portfolio in niche orthopaedic rehabilitation. In 2015, a new Active Motion Therapy range called Kinetec Kinevia was launched followed by a range of hot and cold devices to assist orthopaedic rehab under the brand of Kinetec Kooler. In 2016, Kinetec undertook a worldwide launch of Manosplint thermoplastic range for hand therapists. 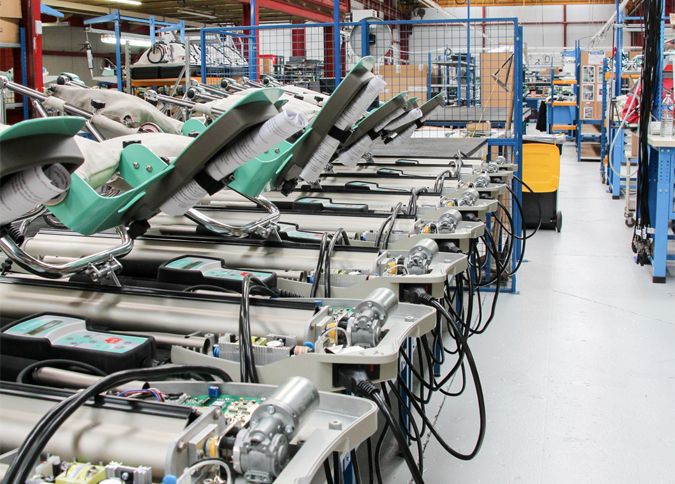 Kinetec continues to develop innovative devices from its French home in Charleville-Mezieres where the factory aims to offer outstanding quality medical products supported with exceptional service and support.

The country offices in the UK and USA offer warehousing, distribution, sales and marketing for the Kinetec product ranges, but also offer in-country exclusive product distributions such as Pulman and FootCare medical shoes in the UK.

Kinetec has the widest range of CPMs available on the market and are the market leaders due to the quality and longevity of the range supported by product expertise.

Find out more about Kinetec CPMs

Kinetec are the primary manufacturers of orthopaedic traction frames in Europe. Kinetec make full and partial frames for all of the main hospital bed brands including Linet, Arjo-Huntleigh and Drive Devilbiss.

Find out more about orthopaedic traction

Kinetec have developed an outstanding active-passive training range under the name Kinevia. Built to the highest standards, this range is ideal for clinic use where multiple patients required supported exercise.

Find out more about Kinevia